To share your memory on the wall of Glena Ilustre, sign in using one of the following options:

To send flowers to the family or plant a tree in memory of Glena Ilustre, please visit our Heartfelt Sympathies Store.

Receive notifications about information and event scheduling for Glena

Provide comfort for the family with a meaningful gesture of sympathy.

Show you care by sending Flowers

We encourage you to share your most beloved memories of Glena here, so that the family and other loved ones can always see it. You can upload cherished photographs, or share your favorite stories, and can even comment on those shared by others.

Posted Aug 12, 2020 at 03:42pm
Please accept my sincere sympathy for the loss of Aunt Glena. I share in the grief of you and your family at this sad time
Comment Share
Share via:
TM

Posted Aug 12, 2020 at 09:40am
Our sincere condolences go out to the family of Glena Ilustre. Our prayers for comfort and strength during this time of bereavement. " I will not leave you comfortless; I will come to you" John 14:18. Gottlieb Memorial Hospital- 5 West Team
Comment Share
Share via:
E

Posted Aug 12, 2020 at 02:08am
Auntie Glen, I will miss you so much. Your sweet smile, your good heart and selflessness. You did not only worked hard for your self and your family, but shared this to your siblings and others. Thank you for the memories and the love. We may not see other in this life anymore, but I do pray we meet each other again, in another. I will treasure the memories always...Love Emmazelle
Comment Share
Share via:
LJ

Posted Aug 11, 2020 at 11:10pm
May Auntie Glena shine her light on this tree so that it will grow towards heaven, sending her our love & reminding her how much she is dearly missed! 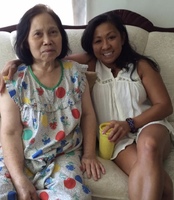