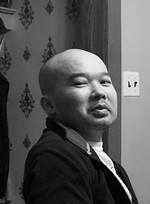 Vongsavanh “Von” Kommanivanh passed away peacefully at home on Tuesday, April 7, ten days after his father, Kong.
Von was born to Kong and Bounnhong Kommanivanh on September 22, 1980 in Vientiane, Laos. Soon after, the Kommanivanh family escaped to a refugee camp in Na Pho Thailand and later to the Philippines. They were accepted for asylum in the United States in 1983 and immigrated to Albany Park, Chicago, IL, where Von lived his whole life.
Von was an entrepreneur and a creative, with a passionate and gentle soul. In 2002, he opened and ran the Art Gallery Kafe, a coffee shop and art gallery in the Bucktown neighborhood. During this time, he was inspired to explore his own artistic practice, which he continued long after the shop was acquired in 2004. After gaining recognition by local collectors, Von’s artwork was exhibited and admired locally and internationally. His paintings investigated the ugliness of society. The beauty was in his raw and honest portrayal of human nature. Von loved music, particularly hip-hop, 90’s Boom-Bap rap and jazz, and founded local indie label McDonaldlize Society Records.
Von planted and indulged in the finest herbs. He enjoyed repairing classic Chevy pick-up trucks, camping and fishing outdoors, gambling with his brothers, and designing clothes for the McDonaldlize Society apparel line. Above all, he was a loving father, son, brother and uncle.
Von is survived by his daughter Genevieve, mother Bounnhong, and 4 brothers; Ai (Kristi), Phonepasith, Chitprasong, and Chantala.

All rights reserved. This obituary is also archived at obittree.com